It is difficult for most people to imagine what it is like when your child has cancer.  I have tried to explain what my son Brent’s journey was like on our caringbridge site, because I know that my friends could not understand nor relate to how brutal the chemotherapy beat down was for him, nor understand the giant surgeries that he has endured over the past two years.  Thankfully, it would appear that he is finally done with surgery at this point.  I have tried, but have failed, to express the fear, the despair, and the complete helplessness that we have felt at times as parents.  I cannot describe the bone weary exhaustion that comes with pediatric cancer, and I do recognize that neither Dan nor I actually did the treatment.  It was exhausting just bearing witness to it.  I cannot even begin to fathom what Brent was feeling.

Some parents on the oncology floor could relate to these things. The general approach to cancer is three pronged: “Cut, Poison and Burn.”  The osteosarcoma protocol calls for ‘just’ cut and poison. Brent would have quite a bit of both.

But, our pediatric cancer story was complicated by the fact that when Brent was shockingly diagnosed just over two years ago with a huge osteogenic tumor on his right pelvis at age 11, he had a brother aged 13, and two sisters, aged 9 and 3.  And our oldest daughter, Lauren, had already had an adrenal cortical cancer at 17 months.  We knew immediately that we had a genetic problem.  The question for that fall of 2011, was who else had this problem. How far did this cancer risk go?

For anyone who has gone through this process, you know that genetic testing takes time.  Like a month.  I was well aware of this, because we had tested Lauren before.  Her adrenal cancer was so rare, that back in 2004 when she had this adrenal mass removed, we had genetic testing done, looking for Li-Fraumeni Syndrome.  It took a month for those results to come back. This, for the record, is a very long time to have your future, and that of your family, hang in the balance. Somehow, she was found to be negative.

So, as Brent began chemotherapy, we waited again, this time for a more refined test to be done on his DNA.  I worried about all of our children, as did my husband, Dan. One day as Brent was sleeping off some chemo, our geneticist stopped in for a consult.  She and I sat in a private room and talked about Brent’s results.  She revealed that he had tested positive for LFS.

This, I would point out, was one of the few days that I completely and utterly lost it in the hospital, an activity that I usually tried to relegate to a more private locale.  I interrupted rounds that day, and hauled the attending oncologist into our meeting...and I was crying, kind of a lot, because I knew that each of my other children had a 50/50 chance of having the mutation.  And, I should point out, I wasn’t feeling so lucky those days.  Lauren, because of the adrenal cancer, I was certain, (with no one really arguing the point) would be positive.  We had to draw labs on the rest of the Ramers, and wait again.

It was about at this point in Brent’s treatment that we learned about the surgical options for him.  He was likely to lose his leg.  We sought second opinions...from the Mayo Clinic, from St. Jude’s, from the Cleveland Clinic...all in favor of amputation.  We finally heard back from a surgeon at MSKCC in NYC...who invited us out for a consult.  I know that sounds like a dinner invitation, rather than a doctor’s appointment, but it was the first indication that we might have some better options for Brent, in terms of his mobility. I really hoped we wouldn’t drive 9 hours, only to be advised, once again, to amputate.

When the genetics results finally came back, just before Thanksgiving, Lauren was indeed positive for LFS with an identical mutation as Brent’s.  Our other two children, most thankfully, were negative.  And, oddly enough, Dan and I were also both negative for a germ line mutation.  Once I answered the very awkward questions about how certain I was with regard to Dan’s paternity of Brent and Lauren (that was awesome, btw, like my life wasn’t already in full throes of the crap-o-matic 3,000...) one of us was presumed to be a mosaic, possibly with mutated cells scattered throughout our body, possibly isolated to certain organs...but most certainly present in either sperm or eggs.  Oh, welcome to research.

We tabled our own issues for the moment, though; because Brent was due to have his big surgery at Memorial Sloan Kettering, in New York City, one that would allow him to walk.  But as he prepared for that, finishing his last few weeks of pre-op chemo, oncology arranged for Lauren to have her initial surveillance scans, following the recently released Toronto Protocol, out of the Hospital for Sick Kids.  The premise behind the tests (labs and ultrasounds every 3 months, full body and brain MRI annually) was to detect cancer in the early stages when it was more manageable and more easily treated.  Small cancer is better than big cancer.  One look at Brent's MRI, and you would have to agree.

Knowing that Brent had a giant surgery planned for mid-January, they managed at Rainbow Babies and Children’s Hospital in Cleveland, to schedule Lauren’s scans before we went.  She had her workup on December 22, 2011 to get a baseline read of what would become her routine scans.  I explained this all to her, and assured her that we would do something special afterward.  She was an amazing trooper.

We came home after a long day at the hospital, and had a late dinner together as a family.  Then, the phone rang, on our land line.  I knew instantly when the doctor asked me if I was sitting down, that something was amiss.  He said that there was a mass the size of a golf ball, in the frontal lobe of Lauren’s brain, discovered by MRI.  They had no idea what it was, and wouldn’t learn what it was until they took it out, which they would do right after Christmas.  We needed to meet with the neuro surgeon the next morning.  He would call back to firm up the time. I was stunned, and completely blindsided.

She had no symptoms.

We were supposed to celebrate our Christmas early, starting with our nuclear family in the morning, spreading out the understandably emotional and tiring celebrations with extended family over several days for Brent’s sake, because he had been so beat up by chemo and had been plagued with neutropenia.  So, as Dan and I wrapped gifts that night, Dan leading the charge to make our Christmas one the kids would think on and remember with joy, we had very heavy hearts.

I mostly wept.  I doubted that I would ever forget this Christmas.  I wondered, at one point, how many stockings we would hang the following year.  The fear and the despair that we felt were immeasurable.  Without my husband, I swear that I would have simply remained in the fetal position, Christmas be damned.  He truly carried me, and act for which I am very, very grateful.

In the morning, the kids were thrilled.  Mostly, I recall how excited they were to give their gifts to each other. Lauren, who loves zebras, got a zebra print bandana from Alex.  Dan and I looked at each other, taken aback with emotion.  We had come across clips and such that we had purchased for Lauren, which contributed to my incessant crying the night before...knowing that chemo or radiation, could take her long beautiful hair.  This bandana turned head cover could be a more practical gift than Alex might have anticipated.

As hard as the hair loss was to think about, it was much easier than entertaining thoughts about how bad this brain tumor could be.

The phone rang in the middle of our gift exchange, with a doctor telling me that we needed to head to the hospital to meet the surgeon.  I replied that it was our Christmas.  We needed some more time.  We would leave in an hour.  I have no idea what sort of scheduling problems that I might have caused with this executive decision, made in that moment.  But we did need another hour of relative normal (We had begun to set the bar pretty low, if we were using this term to refer to 'only' having Brent with a very serious case of high-grade osteosarcoma, rather than two of our children in the oncological crosshairs)
We needed more time as a family, in our home, before we changed Lauren’s world and that of her siblings.  Again.  The doctors could wait, for once.  I felt that we might not have this situation again, with all of us together, and I needed to have a bit more time.  We all want more time, I realize, but this seemed to be a particularly fragile moment to me.

Things moved pretty fast for Lauren.  Within 5 days, she had a PET scan to establish that the tumor originated in the brain, rather than metastasized from somewhere else.  There was a different scan of her spinal column, to gather further information, reassuring the surgeon with the fact that there was no evidence of other CNS tumors.

We had a little Christmas here, a bit of Christmas there.  But in truth, it was all kind of a blur.

Dan and I refused to think beyond the brain surgery on 12/28.  Brent had 2 more weeks of chemo after the New Year, at which point we were supposed to head to NYC.  We were repeatedly asked how we would manage it if Lauren needed post surgical treatment, in the form of chemotherapy or radiation.  I refused to go there in my own mind, because you cannot possibly choose…do you stay with your daughter with the brain tumor, or attend the removal of your son’s hip and the possible amputation of his leg in another state?

This is pediatric cancer, LFS style.
This, was also the point that I stopped being able to relate easily with other “normal pediatric cancer moms,” as if kids getting cancer should ever be considered normal.  As Ramers, we were officially off in the oncological wilderness, and it has taken us nearly two years to find our way back.  There have been bumps, and detours, but I am happy to report that as a family, we are finally taking a break from hospitals.

Both kids are currently cancer free.  Brent has his leg, and Lauren, most thankfully, was found to have a Pleomorphic Xantho Astrocytoma (PXA) that did not require further treatment.  Like when she was a baby with the adrenal tumor, Lauren was again surgery and out.

Dan and I went together with Brent to NYC a few weeks later, and were able to support one another during Brent’s initial surgery, one lasting 18 hours.  I am very grateful for this…and have found that with LFS, I am grateful for so many things of this ilk, things that others find odd, or take for granted altogether.

September is pediatric cancer awareness month.  As all of our cancer has been pediatric, for me, it is very hard to distinguish between LFS and pediatric cancer, which somehow seem to be one in the same.  However, many children with LFS do not get cancer.  Some adults with LFS never get cancer.  Without wishing their childhood away, I do look forward to when my kids can graduate to the adult oncology side of things…strictly for quarterly surveillance scans, of course.

And I also look forward to when there is a cure for it all. 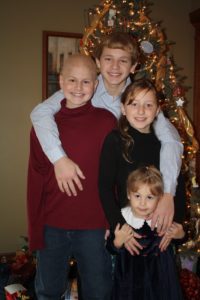 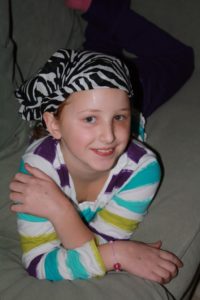