Li-Fraumeni in the movies

by Andi Last  -  Sean Hannity and Hercules have made Travis Tritt the first person to ever say the words "Li-Fraumeni Syndrome" in a major motion picture.

Back in 2014, LFS was used in a plot line on the TV show, Grey's Anatomy. Ann Ramer recapped the episode here. For a condition as rare as ours, this was a big deal in the LFS community.

On October 27, 2017, Let There Be Light was released in movie theaters across the country, bringing LFS to the general public once again. (Thank you Susan Frary for letting us know!)

Fox's Sean Hannity is executive producer of this faith-based film that stars Kevin Sorbo (Hercules, Andromeda) in his directorial debut, and real-life wife Sam Sorbo. Sam Sorbo also co-wrote the film with Dan Gordon, screenwriter on movies like Passenger 57 and TV shows like Highway To Heaven. SPOILER ALERT: If you haven't seen the film and are wanting to, you may want stop here, there are some details mentioned below about the plot. 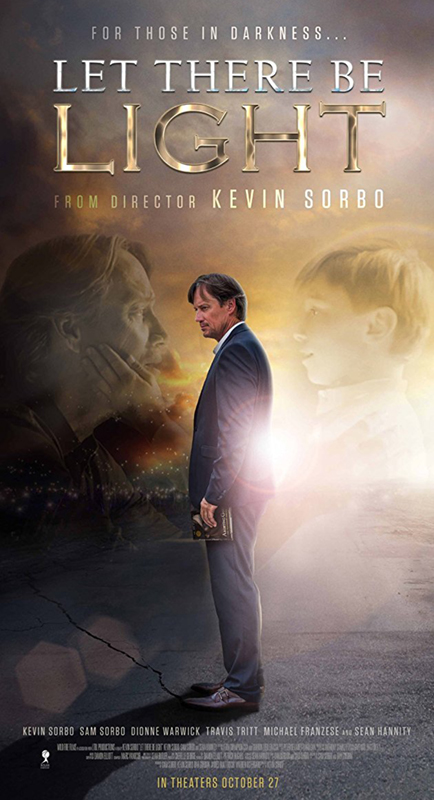 Dr. Sol Harkens (Kevin Sorbo) is a celebrity author and the world's most famous atheist as a result of the death of his 8 year old son, Davey, from a brain tumor. That genetics could be involved is teased early in the film in Harkens' debate with a Christian cleric. Harkens says, "I’m willing to say my son’s death was just plain bad luck, a quirk of genetics, a bad roll of the cosmic dice, or maybe some corporate villain who poisoned the water." He says if he were a praying man, he'd pray to see his son one more time, but that would mean praying to the very so-called God that killed him.

Harkens is estranged from his Christian wife, Katie (Sam Sorbo) and their remaining two sons (played by the couple's real-life sons). With his life spiraling out of control, Harkens drives drunk, has a car accident, and is clinically dead for 4 minutes. In that time he indeed sees Davey again. Davey tells his father it isn't his time, and "Let There Be Light." Harkens returns to consciousness a changed man. The world's biggest atheist finds God. The Harkens make plans to remarry - and to fulfill Davey's request by creating a LTBL phone app to send light across the world to Heaven on Christmas Eve, with Sean Hannity as their media partner. The family seems to be back on their way to happily ever after as Christmas nears - until tragedy strikes again.

Katie has a seizure just like Davey's. In the hospital the next morning, a doctor (played by country star Travis Tritt) comes to talk to the couple. He says, "We’ve had a chance to study the MRI and the CT scan, and we’ve gotten a pretty detailed look at your blood work." Sol asks for the doctor's specialty. Upon learning that the doctor is an oncologist, the Harkens understandably freak out. Katie cries, "It was me, wasn't it? I gave it to him, didn't I, Doctor? I gave our son cancer." The oncologist tells her no. He says, “the blood work indicates that you have Li-Fraumeni Syndrome. People with Li-Fraumeni Syndrome are susceptible to various types of cancer, including brain tumors.” They discuss her prognosis and options, then the family goes on to make the most of the time they have left together.

In one scene, Katie tells her boys that whatever happens to her is God's will, that she doesn't believe in death, that it's like she'll just be in the next room. Katie dies in Sol's arms on Christmas Eve as the world shines their LTBL lights to heaven and her family sings "Silent Night."

Of course, Let There Be Light isn't at all intended to be a primer on Li-Fraumeni Syndrome. Like with the episode of Grey's Anatomy, there were inaccuracies due to time constraints. That LFS is inherited is implied when Katie dramatically asks if she gave her son cancer, but that the oncologist vehemently tells her no confuses the fact that LFS is indeed inherited at least 80% of the time. Genetic testing was never mentioned. Genetic test results aren't available for next-day delivery - at least not yet. Maybe some day. Mentioning that the other two sons have a 50/50 chance of also having LFS and asking about family history would've been a responsible way to educate about the condition, perhaps even prompting audience members to wonder about their own family history, do more research and consider genetic testing themselves. But the goal of this movie is simply to encourage faith in difficult times. Opening a whole can of realism worms that prevent the story from wrapping up with a bittersweet Christmas Eve bow wouldn't help.

Li-Fraumeni Syndrome was simply  the tragic vehicle chosen to convey Let There Be Light's message of hope. Katie's tragedy could've been completely unrelated to her son's, and the story would've still held together. It makes me wonder if there is a true LFS story in the lives of one of the screenwriters. If so, it's a story I would like to hear. In the meantime, I hope that Let There Be Light might turn on a light of recognition and awareness next time those movie goers hear mention of Li-Fraumeni Syndrome.

UPDATE: The day after this blog post was released, I received a message from Dan Gordon, the co-screenwriter and producer for Let There Be Light, and we now have our answer: Dan's brother had LFS. Dan was kind enough to grant me an interview for the Learning Li-Fraumeni Syndrome podcast. I'm so grateful to Dan Gordon for sharing his very personal story, and helping us bring awareness to LFS.

Read more real stories of hope from real Li-Fraumeni Syndrome families on this blog, and on our Facebook page.