The Elephant in the Room- Dr. Schiffman takes on TP53 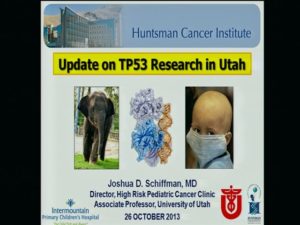 Perhaps the most dynamic speaker of the 2013 Li- Fraumeni Syndrome Conference in Boston was Dr. Joshua Schiffman from the Huntsman Clinic in Utah. I have several LFS friends who see Dr. Schiffman and his team and he comes highly recommended. I heard of his passion for p53 and helping our community. I was eager to hear what he had to say and he did not disappoint.
Dr. Schiffman's Conference talk starts at 1:29:05 and can be found HERE.

Science like life, must find balance. For every nanoparticle discovered, we must step back and appreciate the big picture. In LFS, we know a mutation- which is often an in error in one base pair on our DNA leads cells to go haywire and turn cancerous. If all cells have the same chance of turning into cancer, then we might assume that large animals such as whales or elephants have more cells than smaller animals, they have a greater risk of developing cancer. Yet in the early 1970's when Dr. Peto from the UK looked into records, he found that elephants and whales actually have less of a risk of developing cancer or at least dying from it than humans do. This concept is called Peto's Paradox-  that cancer incidence did not increase with body size. This is not justification for living off of a steady diet of donuts- we are talking difference in sizes between species. Sometimes great science minds must step back and see the big picture. Dr. Schiffman has taken that step back and saw a great picture, painted by Christie the elephant at the Salt Lake Zoo. 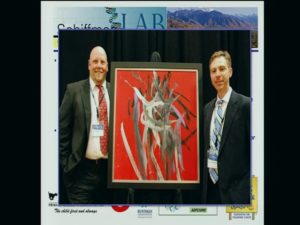 There has been a lot of research into the p53 gene. It is perhaps THE most widely researched gene ever. We know what base pairs make it, how it folds, what many mutations do to it, that certain toxins cause mutations to it and that not only does it keep cancer from going crazy, it also has a major role in aging and pregnancy implantation. So of all the things I expected Dr. Schiffman to talk about, I was not expecting him to start talking about a trip to the zoo, an unlikely collaboration with zookeepers and elephant DNA.  I was beginning to wonder what PETA would have to say about Peto's paradox.  Then Dr. Schiffmann enticed us with the declaration that cancer in elephants is rare. If they could find out why and how this lack of tumors occurs, perhaps that could open up therapeutic possibilities for our p53 challenged community. One of the first discoveries was that elephants have more than 20 copies of p53. They have 20 back up copies if one copy gets mutated.

Dr. Schiffman also found that the elephant's copies of p53 are retrogenes. No, they don't dance around in tie dye and bell bottoms, this means the copies of p53 were not there at some point millions of years ago and then during evolution the elephants used the p53 protein the gene coded for- but then made more copies of the gene. So now Dr. Schiffman is trying to find when and where and how this happened because if he does- that bit of knowledge could lead to therapeutic potential for folks who have faulty copies of p53.

Dr. Schiffman is also working on comparative oncology. His team is looking into dog's experiences with cancer- man's best friend who also seem to get high percentages of cancer. Did you know boxers get brain tumors? 1 in 4 get glioblastomas. They are going to test using CT scans of the boxers to catch brain tumors early, analyze them, their DNA and show a preferential outcome through ealry detection. Long term results will impact our community by making it easier to get screening and insurance coverage for these tests.

The work being done is exciting and promising. Much of Dr. Schiffman's work is funded by grants and organizations like Alex's Lemonade Stand Foundation  and Soccer for Hope . It is reassuring to know that donations given there are going to researchers whose work directly impacts Living with LFS.

Oxford Journal- Why Don't all Whales Have Cancer?