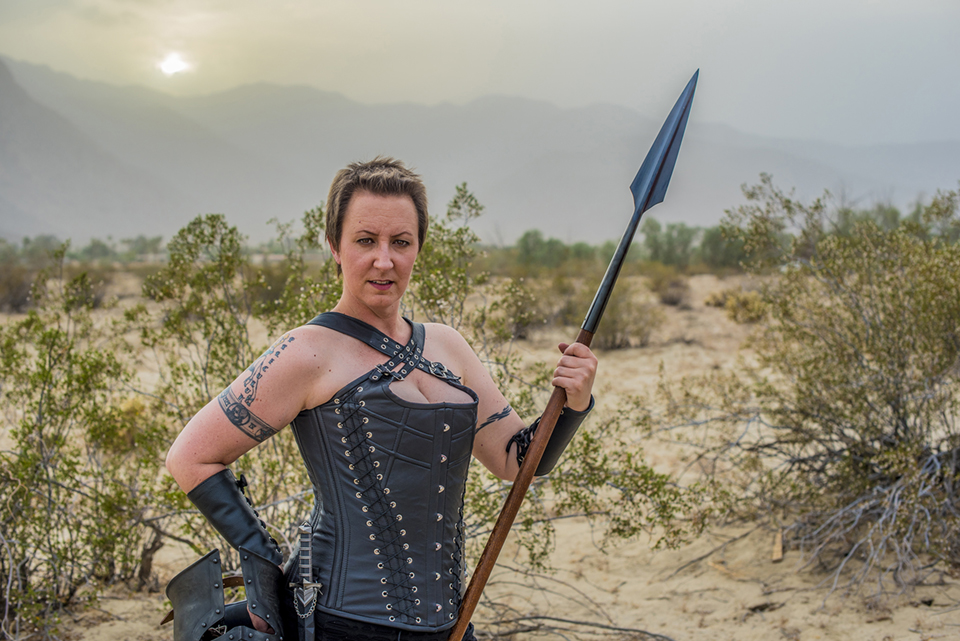 My name is Andi. That's my husband Jay in the video with me. I’m the mutant, and he’s my warrior.

In March 2015, at the age of 41, I was diagnosed with breast cancer. Not long after, I learned that I have a very rare inherited disorder called Li Fraumeni Syndrome, or LFS, which makes me prone to getting all kinds of different cancers.

In simple terms, we're all born with two copies of a cancer suppressing gene called TP53, one passed down from each of our parents. In families with LFS, one of those genes is mutated. That’s why some of us call ourselves mutants.

Music, photography and video are things we really enjoy, so doing them was a huge help for both of us in dealing with all of this.

A few months after the worst of the chemo was over, we drove to the desert to photograph Ricardo Breceda’s giant metal sculptures in Borrego Springs, California. The sand serpent really caught our imaginations. While taking photos I said it’d be great to shoot Jay as a knight fighting it with his sword.

He said really I should be fighting it because it reminded him of the monster I'd been dealing with.

I realized he was right, the sculpture is a good analogy for LFS: it’s a massive 350 foot long scary monster with a dragon's head, a serpent’s body and a rattlesnake tail. It pops up out of the sand and disappears again and you never know where it's going to show up next.

Li Fraumeni Syndrome is also a massive, scary monster. It can cause many of different kinds of cancer, in kids, adults, and entire families. If you have LFS you might get multiple types of cancer throughout your life - or even at one time.

Since I’m not fighting LFS alone, we decided we would fight the monster together in photos as well. And thus, the Mutant Vs Monster project was born.

Over a few months we put together costumes and did a series of shoots with the sculpture in the desert. What we thought would be a few pictures turned into a much larger project.

It was an expression of our creativity and a way to deal with some pretty lousy circumstances, but it has also turned into a great opportunity to raise awareness and support for LFS.

You can visit MutantVsMonster.com to see these photos and read our story. And you can make donations to Living LFS, which is a mutant support organization. And we mutants thank you!

Special Mutant thanks to Andi Last and her husband Jay.

PrevPreviousLi-Fraumeni Syndrome- Cancer in Olympic Proportions. The Story of Brazil's p53 Mutation.
NextPositively Living LFS, It's NOT a Death Sentence.Next