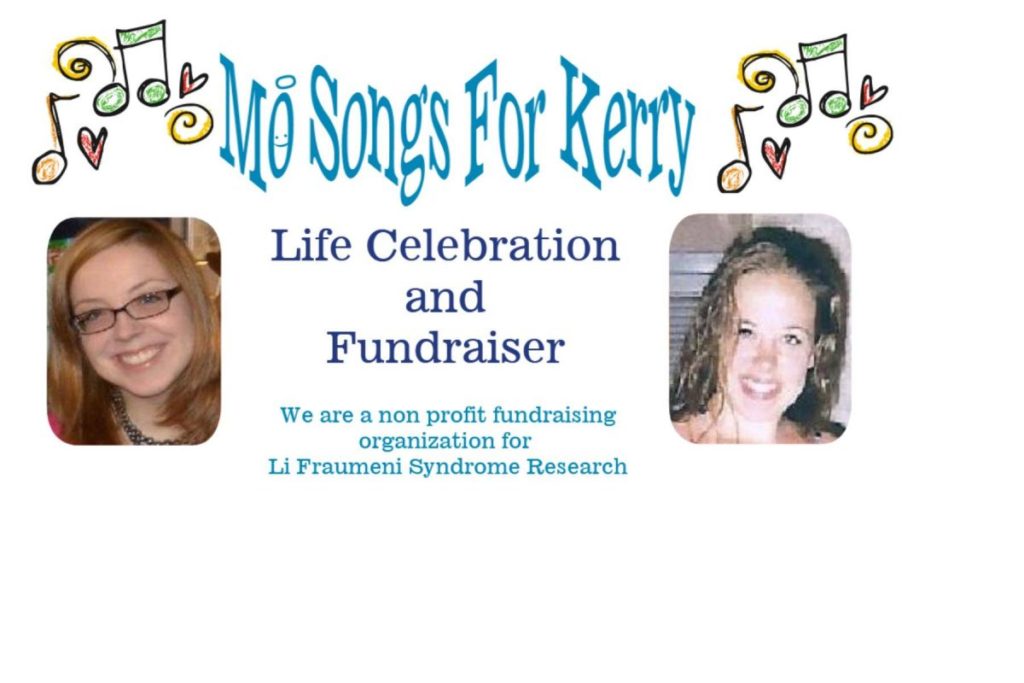 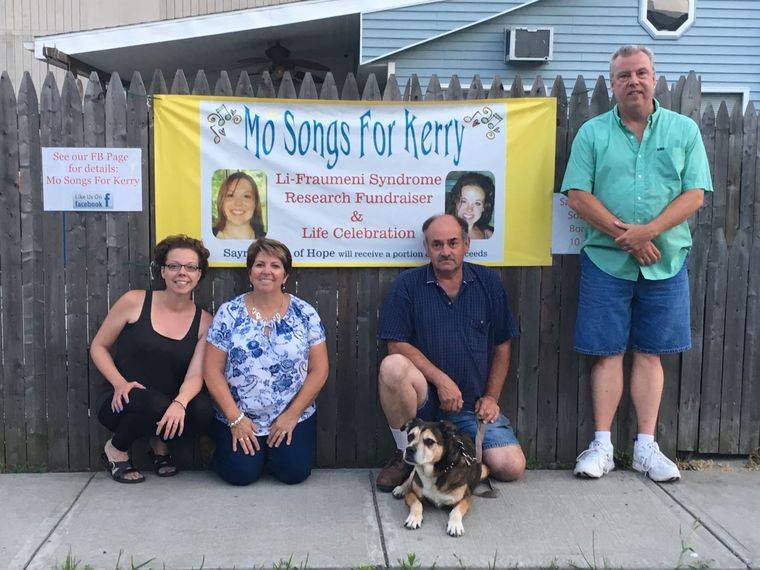 James Higgins lost his dad, his sister and 2 daughters to LFS cancers. Cancer came after him twice. This is his story and how he lives with LFS. This year will be the 3rd Fundraiser held in honor of his daughters Maureen and Kerry, the Mo Songs for Kerry Event. These are James' words, he celebrates his daughters by educating about Li-Fraumeni Syndrome, he is working towards awareness and change and he is not doing it alone. This is how he is living LFS.

In the clearing stands a boxer, 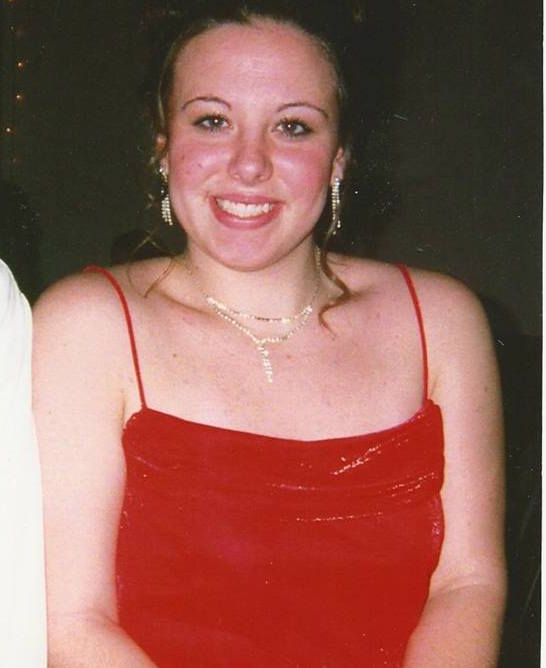 And a fighter by his trade

And he carries the reminders

Of ev'ry glove that laid him down

And cut him till he cried out
In his anger and his shame,
"I am leaving, I am leaving."

But the fighter still remains.
- The Boxer, Simon & Garfunkel

Cancer has cut a swath of destruction across the generations of my family, ruthlessly snuffing out the young lives of my father, my sister and two of my daughters. It’s already taken two unsuccessful swipes at me personally, but thankfully I remain standing.

Though all our cancers were different, we shared one thing in common – Li Fraumeni Syndrome. If you’ve never heard of it don’t feel bad. Neither have most people. It’s a genetic predisposition to cancer, caused by a mutation on the p53 cancer suppressor gene. What could possibly be worse than cancer? How about a condition that gives you a 90% chance of getting cancer in your lifetime – and multiple cancers?

Both my Dad and my daughter, Maureen succumbed to their first bouts with the disease, because by the time it was discovered it was too late. My sister, Gigi, suffered through three different types of cancer before finally running out of luck, as did my daughter, Kerry. Both of mine were found early enough to minimize the damage and avoid metastasis (spreading to other areas of the body), thus sparing my limbs and my life. I harbor no illusions of indestructibility, however. I’m well aware that the big C could be waiting just around the next corner. Li Fraumeni Syndrome (LFS) practically guarantees that. That necessitates that I be forever vigilant, feeling for lumps and bumps, mindful of aches and pains on a daily basis. I must walk a fine line between diligence and paranoia.

The p53 gene is like a plant engineer or a building super. It’s his job to go around the body repairing DNA damage. On those hot summer days when you spend a little too much time in the sun that bad sunburn means definite DNA damage. Along comes the p53 gene to do what it can to repair things. Sometimes it can, but sometimes the cell is too far gone. In cases like that the p53 gene is supposed to send a signal that causes cell apoptosis. In other words the cell is commanded to kill itself to prevent any replication of bad DNA.

When we’re born we are all supposed to have two working copies of the p53 gene – one from each parent. In the case of mutants such as myself, there’s only one on the job. All it takes is one rogue cell to begin splitting and before long that one little cell is a thousand, then a million. That’s what cancer is essentially – a runaway mass of your own tissue that refuses to follow the rules of your body.

When we were first told of the possibility that we could be a Li Fraumeni family the doctors said it was a recent discovery and that only 450-500 families in the world had been identified thus far. That has since changed dramatically. Recent estimates put the prevalence at possibly 1 in 5,000, meaning that there could be over 60,000 individuals in the US alone affected by the condition. That’s a higher incidence than muscular dystrophy, which affects between 1 in 6,000 and 1 in 10,000 people. The difference is that everyone has heard of muscular dystrophy, thanks in part to Jerry Lewis and his telethon. We don’t have a high profile celebrity spokesman, but what we do have is an ever increasing number of people being diagnosed, people who can get the word out about the disease. Up until Kathy and I attended the LFS conference in Columbus, OH recently, I had never known another living person with the disease, other than Kerry and myself. Out there we were surrounded by them and their stories mirrored ours in many ways.

If, in fact, the disease is not as rare as they once thought it was, then spreading awareness is crucial. There are thousands of families out there right now who, like we used to, just think they’re unlucky. It’s important not only for their own sake, but for future generations. Every person who carries the mutation has a fifty percent chance of passing it on to their children.

Our Mo Songs For Kerry benefit, coming up on July 16, 2016, is important not only for the research money we can raise, but also for the awareness we can raise. If we can help identify one family, one individual, and prevent the suffering we have had to endure, then it will all be worth it. The ghosts of my children can’t speak for themselves, but I can.

I’m LFS strong because I’m still here. And I have a voice.

Join the Higgins family, by helping them celebrate Mo and Kerry.  Help their voices be heard as they raise awareness and funds for LFS research. 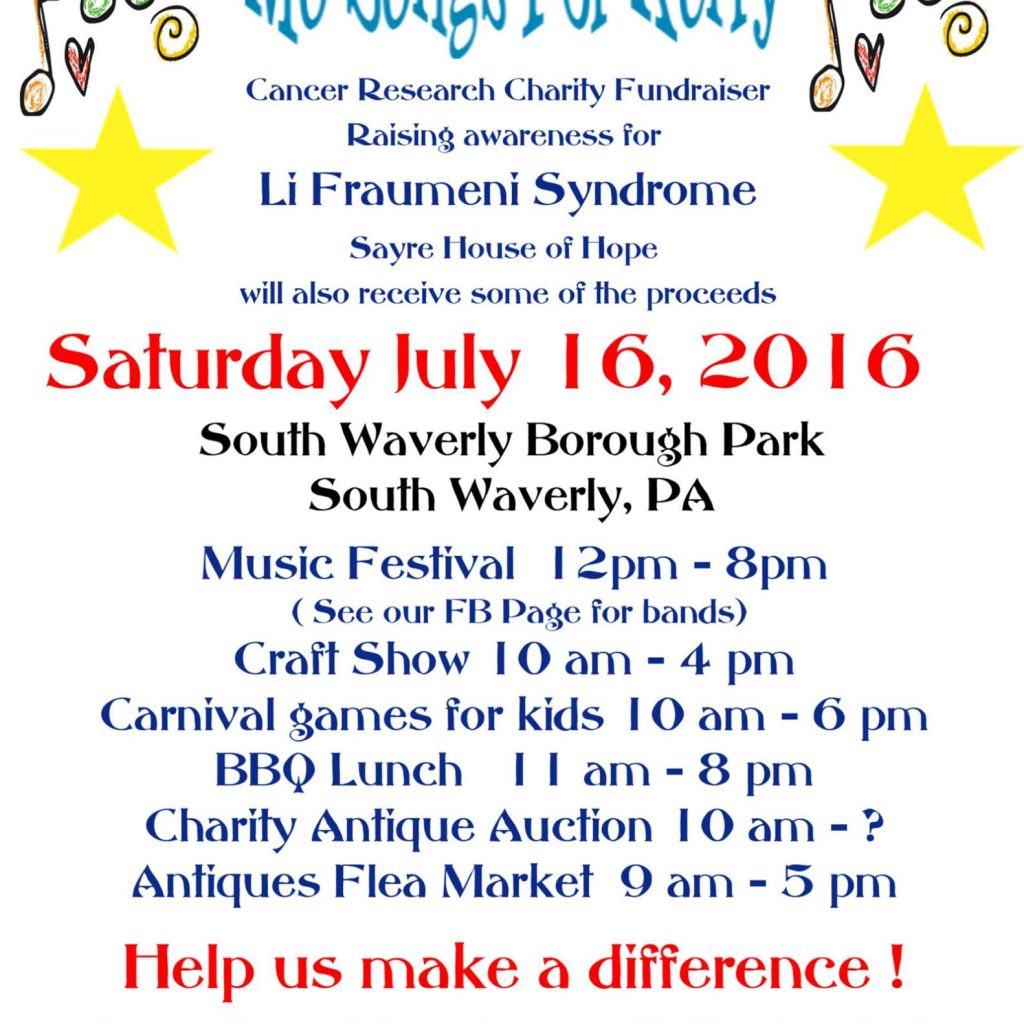