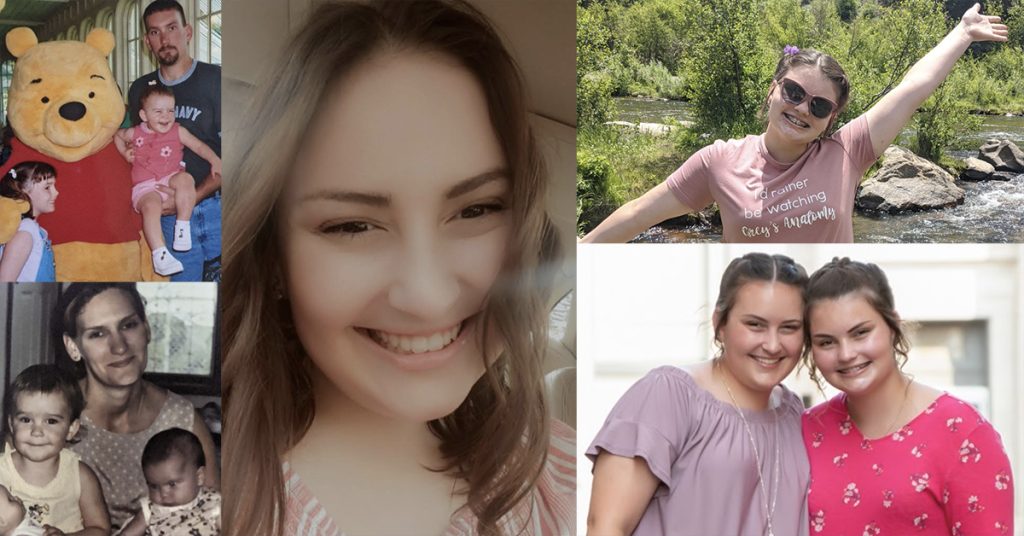 Hello. My name is Taylor. I am twenty years old and I was diagnosed with Li-Fraumeni Syndrome in December of 2021.

When I was seven years old my dad was diagnosed with stage four adenocarcinoma lung cancer. This came as a huge surprise to my family because he was a perfect healthy person and never smoked a day in his life. He died when I was eight.

Right before he went home to hospice care, my mom asked for a genetics consult for dad, because at the time his sister was battling breast cancer, and his uncle had died many years before in his twenties of melanoma cancer. At the time the geneticist said he could not link the three cancers and there wasn't anything he could do.

Nine years later, my aunt's breast cancer spread to her liver and she died of liver sarcoma.

In July of 2021 my sister, Lexi, had developed side pain and her abdomen became very hard and distended. She went to the doctor where they did an ultrasound and found a cyst on her right ovary. She went into surgery about a week later and after pathology came back from that surgery the discovered that it was a tumor instead of a cyst. It was a mature teratoma with glioblastoma cells. Mature teratomas are almost always benign, and glioblastoma cells are almost always found in the brain, which is why it was her case was so rare. Once she went in for her second surgery to have the ovary removed, it was already too late. The cancer was caked all over many of her organs. She was diagnosed stage four. She passed away within six months of her original diagnosis, in December of 2021.

At the time of her original diagnosis of ovarian cancer in July, my mom and her were advised to see a cancer genetics counselor given the family history of cancer and now Lexi's cancer. This geneticist was amazing and identified it as Li-Fraumeni Syndrome immediately and tested her only for the TP53 gene mutation. She was spot on and Lexi was positive.

It took a couple months to find time to get the rest of us tested with Lexi's doctors appointment, traveling to another state for her treatment, recovery for surgery, and every other hardship that comes with a difficult cancer. In November my brother, sister, and I were tested for the gene mutation. My older sister, Paige was negative, and my younger brother Seth was negative. I was positive. Since my dad and aunt have both passed away, we have no way of knowing for sure if they both had LFS too. But given the types of cancers and ages they occured, we assume they most likely had LFS too.

My surveillance screening has worked quickly the past two months. So far I have had labs, a brain MRI, a breast MRI, an abdominal ultrasound, a transvaginal ultrasound, and a dermatologist examination. So far, they have only found a small spot on my brain that they believe is what is called a meningioma, given that it is in my meninges. As of right now it is not growing, so we take a breath and enjoy life without LFS for a little while.

Read more stories from the LFS community on the Living LFS blog.