-Adrenocortical tumors are very rare, seen in about 0.2 percent of all childhood cancers.-More girls are affected by adrenocortical carcinoma than boys.-It is usually seen in children between  the ages 1 and 4 years old-The tendency to develop adrenocortical tumors may be inherited, like with LFS.
These are the stories of 4 young ladies who faced adrenocortical carcinoma.  Since adrenal tumors are so rare and linked to the germline TP53 mutation that causes LFS, many face a double whammy, cancer and a diagnosis of a hereditary cancer syndrome.
Gwendolyn- A New Kind of Crisis.
Gwendolyn was diagnosed around 18 months with Adrenocortical Carcinoma, a very rare adrenal tumor. Her symptoms were precocious puberty, but nothing else. We were rushed to Sick Kids in Toronto, Ontario where they did a MRI and CT scan to confirm the tumor. We then found the tumor on her adrenal gland was roughly 8 cms and it had spread to her lungs. There were 11 spots on her lungs. Because of this type of cancer, they also did genetic testing for LFS, which it was positive. What we thought we knew and what we now know has changed drastically. 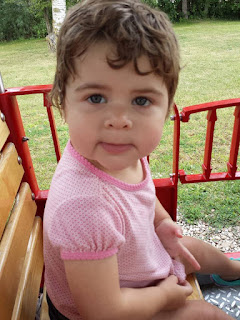 Chemotherapy wasn't the worst hurdle we would experience, nor was the vomiting as her ECG(electrocardiogram that measures the heart) showed a prolonged QT which meant goodbye to her one anti nausea medication- that meant she spent the first night of cycle 4, 5, and 6 throwing up. After Cycle 4, they removed the tumor and her left adrenal gland.  Which left her with her right adrenal gland that is no longer functioning due to Mitotane. I think we were shocked more than anything as she was the first in our family with a genetic mutation. It has changed a lot of things in our family and having more children is  probably not going to happen. We worry way too much about her, as the adrenal insufficiency is a big deal.


Nobody could predict or even expect what would happen after cycle 6. We were home for a week after her cycle when we experienced our first adrenal crisis. I drove up to Orillia Ontario (our satellite oncology clinic) , she spent 5 hours there to stabilize her and air lifted her to SickKids, where we spent 1 week. Gwen experienced 2 more crises after chemo, which was scary beyond belief. All her doctors were shocked how she goes from her normal self to a full blown adrenal crisis. So all her medications were increased including hydrocortisone, fludrocortisone, calcium and she was also put on an oral sodium which she takes very well. She was put on overnight hydration, as her body became very dehydrated very quickly.


She makes it difficult for the doctors as she isn't textbook, so they are hesitant in changing medication or protocol for her. We have learned the signs and symptoms of adrenal crisis rather quickly and don't hesitate to make a trip to our clinic. The first time she had a bad adrenal crisis, if we had waited another couple hours we would not have her here today. We have learned so much over the last 15 months of diagnosis and we still learn things today. The frustration is her not being symptomatic and not stress dosing before her body is looking for the extra help. We do feel alone at times because of the adrenal cancer and LFS, we are very few in Canada and there might be more but they might not want to have others seek them out. It's hard at times to relate to others with "normal" cancers, as ours is rare and not heard of. I refer to 1 person in Toronto, Ontario having ACC.
- shared by Gwendolyn's mom

Lily-Celebrating Normal
Lily is 10 and remembers that she had cancer but she really doesn't remember going through chemotherapy or how sick she was and for that we are grateful. At the age of 3, Lily started going through puberty. I had brain tumors in my family, so I immediately worried that she had a rare pituitary tumor. I took her in to a pediatrician who ran some bloodwork, but otherwise didn't seem too concerned that a preschooler was "developing" early.

Even though I knew my dad had LFS, I worried about the tumors I knew we had in our family,  brain tumors, breast cancer, sarcomas, but adrenal cancer wasn't on my radar. An attentive physician got us into an endocrinologist who immediately discovered Lily's adrenocortical carcinoma- an 8 cm, softball sized tumor in my 3 year old's abdomen. It was a "core" LFS tumor. Kids who have no family history of cancer who turn up with this tumor, usually get tested for LFS.

After her diagnosis, I learned how rare adrenal cancer is. I remember my mom talking with Dr. Li when my brother was diagnosed with a brain tumor, so I looked for the leading specialist in pediatric adrenocortical carcinoma. I found Dr. Raul Ribeiro at St. Jude's, who not only immediately returned my call but spent and an inordinate amount of time discussing LFS, adrenal tumors, treatment and a scared mom's fears.


Treatment was all we were promised, she was miserable, we hit hurdles and we learned a lot about side effect management. I learned that it was a completely different ballgame than when my dad and brother had brain tumors. But she would still put on her little tap shoes because she liked the way they clicked on the hospital linoleum and she would dance through treatments.

Adrenal cancers have a poor prognosis. Especially tumors as big as Lily's. We dealt with weight loss and mood swings and adrenal crises, a result of the chemotherapy drug mitotane- which not only kills off adrenal cancer cells, it kills off healthy adrenal cells too. We replaced the hormone her adrenals produced with pills and readied ourselves with shots in case of sickness or emergency- her body won't make enough cortisol to protect her. Lily went back to school. We celebrated, even though we had to fight with the school over what appropriate precautions were. We wanted her to have the normal school experience, with a safety net. We celebrated birthdays. We celebrated holidays. We did 6 month screenings and had a few shadows and scares along the way. But that is Living LFS. Mostly we have been living. 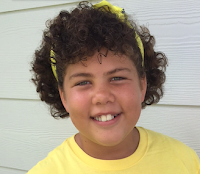 Lily's 5th cancerversary came and went. So did the 6th. I remember during her treatments thinking we would throw a big party every year, but as they approached and we were busy with other things, it didn't seem as important. Birthdays were far more important and normal. So as we sneak up on her 7th cancerversary, for a rare adrenal tumor with a poor prognosis, I am grateful. I am happy she is still here. I am happy she does't remember all that she went through that year. I am grateful for each additional day we have been given. - shared by Lily's mom

-As a result of hormones generated by adrenal tumors, subsequent removal of adrenal glands and sometime chemotherapy, many survivors of adrenocortical tumors suffer long term effects.

-Adrenal Insufficiency is one of the most common treatment side effects of adrenocortical carcinoma.

-For more information on adrenal cancer and LFS refer to the previous Blog:

Pediatric Adrenocortical Carcinoma in LFS
-Unfortunately, children with LFS are at risk for having multiple cancers.

Loraine- Long Term Effects
I am now 31 and I remember almost nothing about that period so I don't think I can help you with telling things about that period. I was 9 months old when I was diagnosed and they removed the adrenal when I was 10 months old in Radboud UMC, a university hospital in Nijmegen, the Netherlands.

What I know is that I have a lot of bonding issues, which started in that period (you hear it a lot when little children are separated from their parents that they develop bonding issues) and that my hormones were acting really weird when I grew up.

Last year the surgeon removed my ovaries after my hormones stabilized with medication (which are downgrading the oestrogen levels) and since then I'm doing so much better, I'm not depressed any more and I'm not having heavy moodswings any more.


But I have to say that the other adrenal is producing almost no cortisol, it's about the zero-line and every 6 months they check if I can go on the way it is or if I need medication.


I had adrenal cancer as an infant in 1985, I was too young to remember what I went thru but growing up always knew I had adrenal cancer as a baby. I would get routine check-ups,CT Scans, and ultrasounds yearly until I was about 15. Keep in mind I never knew I had Li-Fraumeni Syndrome.
At around 15 years old, I was told that given I had not had a recurrence and everything had been fine for 14 years, that scans were no longer needed. I still got check ups regularly, but since I didn't know I had Li-Fraumeni Syndrome I never thought I could get cancer again. I think the only thing that saved my life is wanting to become a nurse. It turned me into a hypochondriac which ended up benefiting me in the long run. 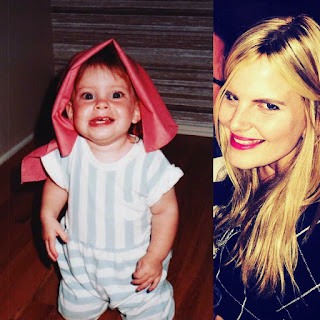 After being diagnosed with my 4th cancer, my breast surgeon and endocrinologist suggested that I go to M.D. Anderson given that surgery was more complicated and it was the best place to be. The best is an understatement! This is where I was TRUTHFULLY tested for Li-Fraumeni Syndrome and sure enough was positive.
Since going to M.D. Anderson my screening has been very aggressive. I have had a recurrence of breast cancer 3 times and have also done radiation when was beneficial for the breast cancer but caused sarcoma that was caught very early.
I am now 32 and I get scans every 3-6 months and ultrasounds. I am also on Herceptin for the rest of my life. I am very comfortable with my doctors and always make sure they understand my genetic disorder. The most important thing to remember when you have Li-Fraumeni Syndrome is that you are not like every other cancer patient but unique in your own way. You know your body so you need to be your own advocate or your child's advocate when something isn't right. Live every day like it's your first.

I would like to sincerely thank Melissa, Loraine, and Lainie for sharing their heartfelt experiences with me. It was very lonely when Lily was diagnosed and information was tough to come by. Hearing other stories of success and survival give me hope. Thank You, Jen Mallory