Choroid Plexus Brain Tumors are highly associated with Li-Fraumeni Syndrome. The choroid plexus is within each ventricle in the brain; a series of vessels and tissue that are responsible for making cerebrospinal fluid that takes impurities and waste away. Tumors that grow here can block the flow of fluid and cause hydrocephalus (swelling in the brain). Choroid plexus tumors are very rare, they make up less than 1% of all brain tumors. Yet,  greater than 85% of choroid plexus tumors occur in children under the age of 5.  For more information on the tumors: Living LFS: GO Grey in May-Choroid Plexus Carcinoma

In preparation for Childhood Cancer Month, we asked our support group members to share their "minis." Some have had cancer, some have not, there are sibs and some have passed away. I noticed a lot of minis who had or were in treatment for Choroid Plexus Carcinoma(CPC). So I asked their parents what their experiences were and if they had any words of wisdom. They did. 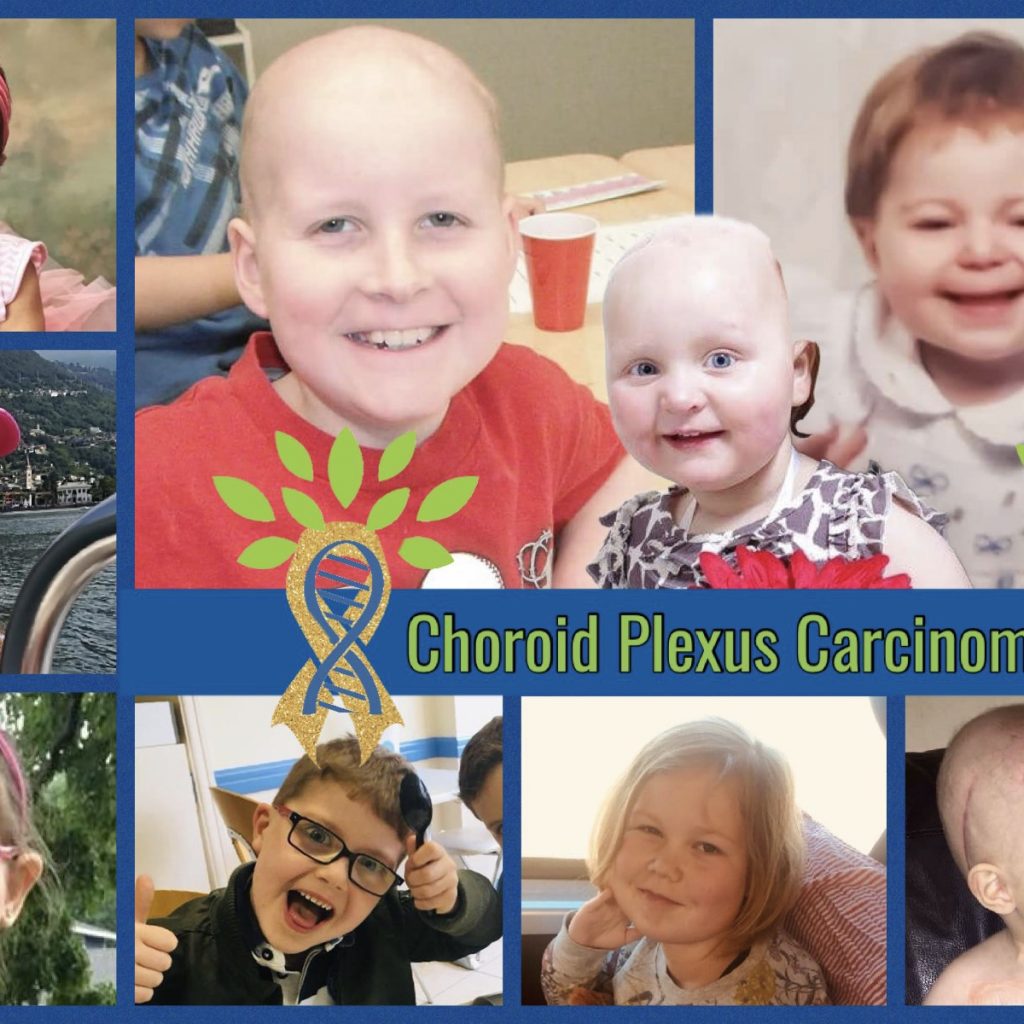 In the early 1990's, clinicians were beginning to see a link between kids with Choroid Plexus Carcinoma and LFS. Yet, it wasn't until the 2000s that there was enough data to tell. The problem with Choroid Plexus tumors - they are very rare. Li-Fraumeni Syndrome is also very rare. In order for clinicians and researchers to draw conclusions, they needed data. Unfortunately, with rare cancers, that data can be tough to get. 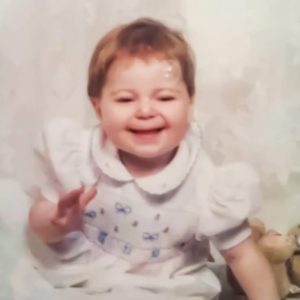 Chris: "I had a daughter that was diagnosed at 3 months old with choroid plexus carcinoma. Her symptoms were staring and she cried terribly when we picked her up. Her tumor was the size of a baseball. They surgically removed  it at 5 months old  and she did very well with treatment chemotherapy for two years after that. She was diagnosed with LFS during treatment, but that was 20 years ago, no one knew a lot about it then. Radiation for her was very bad, she did not do well with it at all. Soon after, she developed myelodysplasia and was too weak to recover. Summar died in 1998."

Trust your gut. Rare conditions are not always on a doctor's radar. So many symptoms of cancer and brain tumors are similar to a nasty virus. Many parents have to advocate to get their children the help they needed, even before LFS was diagnosed. LFS status can affect treatment decisions.

Lyndsey: "My daughter was diagnosed at 5 months old. She was crying, lethargic, vomiting so I took her to the local ER and was sent home. The next day her fontanelle bulged out, she was not holding down fluids and was somewhat limp, so I called an ambulance. We were sent home again with no tests or answers.  The third day, my family and I broke traffic laws to get to the children’s hospital, 2 hours away, because she was basically dying. After 3 brain surgeries, 5 rounds of high dose chemo and 3 stem cell transplants, she was diagnosed with LFS during treatment. She’s 2.5 years old, is cancer free as of now and doing relatively great."

Choroid Plexus Carcinoma generally occurs in children under the age of 2 and the survival prognosis is poor, especially in tumors that have acquired many mutations. If the child is diagnosed with a TP53 mutation, yet their parents do not have the mutation, they are considered "de novo"- a new mutation. These mutations can happen in the parent's germ cells or at some point during pregnancy.

Camila was diagnosed at the age of 18 months with Choroid Plexus Carcinoma in the right side of her brain. The doctors said that she had only 30% chance of survival and if she survived she would be a girl with special needs without the possibility of moving.  Camila lost one part of the brain... she survived to the 14 hour brain surgery, showing everybody that she wanted to live, and started moving her legs. Now she’s 2 years and 9 months and she’s NED (No Evidence of Disease). Camila just started walking and still has problems in her immune system from the chemotherapy, but she’s getting better every day. She has an MRI every 3 months, blood work every month, ultrasound every 3 months and Physical Therapy 4 days per week. Camila has LFS and her parents are negative. She is the only one who has it in the family.

Kids and people with LFS are very sensitive to ionizing radiation, especially to the brain. Risks and benefits should be discussed with a professional team knowledgeable in Li-Fraumeni Syndrome. Recent studies show that radiation therapy for Choroid Plexus Tumors in LFS could negatively affect survival. Treatment options for Choroid Plexus Tumors include surgery and chemotherapy.

Claire Roberts: "My son was diagnosed at five months old after being seen by three

doctors over a 24 hour period. They said he was teething!! His symptoms were projectile vomiting, sunsetting eyes, he had lost head control and he was basically sleeping all the time, very grizzly. Left sided weakness set in too whilst being transferred by ambulance to another hospital following diagnosis. He had hydrocephalus and now has a shunt. LFS diagnosis came much later after his brother was diagnosed with a rare sarcoma. We were offered testing though after his treatment ended. He didn’t have radiotherapy due to his age, just surgery followed by chemo intravenous and intrathecally via a reservoir directly into the ventricles. He is doing well now."

Knowing LFS status can affect screening and treatment decisions. Many don't know at the time of Choroid Plexus Carcinoma diagnosis that there is a TP53 mutation. Often genetic counseling and testing is recommended during treatment. Testing for hereditary conditions like LFS is a personal and even controversial decision.

"Hi I’m Jenny. Mum to Billy.  Bill was diagnosed with choroid plexus carcinoma (brain cancer) in December 2015 . He had surgery and 6 cycles of chemo. He was then diagnosed with Li-Fraumeni Syndrome. His sister, who is 3, has a 50/50 chance of having LFS, but they do not test in the UK until she can give consent.  Bill's dad has tested positive. He’s 31 and has not had a cancer yet. Billy is doing brilliantly now. He’s 3 in May and thriving. I just get terrified that everything is going to crumble."

Sometimes aggressive tumors like CPC come back. This can be daunting, yet there are cases of successful treatment in CPC recurrence in LFS children.

Lisanne: "Elise was diagnosed in 2010, 2012, 2016, and 2018, as well as having an Aneurism Bone cyst in skull twice in 2017. Elise lost lots of her mobility when she was three years old, but is always busy helping others and making sure others are alright and she loves pranks and art."

Tori: "I was a CPC child. I was 9 when I was diagnosed with choroid plexus carcinoma and my symptoms were headaches, vomiting, favoring one side of my body (I am right handed but used my left hand, things like that) and was dizzy a lot. My only treatment for the CPC was surgery, it didn't spread and was contained inside the tumor. I was diagnosed with LFS after my second cancer."

There is HOPE. Choroid Plexus Carcinoma is nasty and aggressive. Like LFS, it is not a death sentence. There is no "one size fits all" for screening, treatment, or diagnosis. Being aware of the symptoms, trusting your gut and knowing LFS status can make a difference in survival.

Successful treatment of CPC in child with LFS

Successful Treatment of Recurrent CPC in child with LFS

Should Radiation Therapy Be Avoided in Choroid Plexus Carcinoma Patients with Li-Fraumeni Syndrome?

PrevPrevious5 Life Lessons From People Likely to Get Cancer
NextSandra's Story: Power from Knowledge and HopeNext