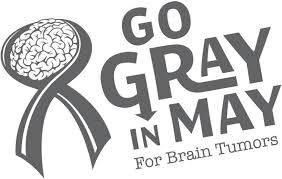 At that point- there was a definite suspected genetic link. It was years later that a germline mutation in the p53 tumor suppressor gene was identified and the syndrome was named after the 2 young clinical researcher's who traveled the country looking for clues. For decades, p53 and it's roles in cancer have been researched. Each new discovery seems to open more doors to new pathways, treatment potentials and control of errant cancer.

Most of the Core LFS cancers behave badly. They are angry, they don't respond well to therapy and they crowd out the healthy needed cells. Brain tumors are known for their aggressive nature in LFS. It is estimated that 13% of tumors in LFS before age 45 are brain tumors. The majority of those tumors are astrocytomas. In 2002, an examination of the roles of p53 in various brain neoplasms helped illuminate one of the roots of the problem. Cellular studies revealed that when wild type(functioning) p53 was expressed in brain tumor cells- it suppressed the aberrant growth. On the other hand- when there was a loss of p53 function(as there is in mutant p53) the cells immortalized- they kept growing and growing and growing. Mouse studies show that inactivation of p53 correlates with the beginning of tumor formation. There is also a noticeable relationship between p53 and the aggressiveness of brain tumors. Mutant p53 plays a role in the progression of cells from low grade to high grade cancer and p53 status is used to determine prognosis.  What does this mean for people with germline p53 mutation? Routine screening for brain tumors- promotes the chance of catching tumors early, before they progress to  high grade tumors.

Having LFS with a brain tumor is completely different for a mutant. I didn't even know I had LFS when I was diagnosed with a malignant brain tumor. My oncologist expected it was something hereditary. I was lucky that my tumor was removed all the way and after I saw the geneticist it was agreed that not having chemo and radiation was the best idea since I did have LFS. While I was lucky that tumor was removed completely, having LFS has made it very different for me in the after effects. I have dystonia(as the result of a medical mistake) and seizures-which are caused from having the brain tumor. Most people with dystonia have Baclofin pumps in the spine to help control pain from dystonia and helps with some contractions. But since I have LFS,  I have to have MRIs every 6 months and since electrodes from a pump are magnetic, I can't have the pump. Being a mutant has also meant that when my seizures are really bad or out of control, myself or my family have to decide if a CT scan is worth the radiation risk to find out if another tumor is present...it's always a hard decision.

And then there's worrying. When I have a terrible headache, is the brain tumor back? Should I not use a cell phone? Will I die from a brain tumor and not know I had a brain tumor...or die from a seizure? My risk for a brain tumor coming back is pretty strong, considering I have LFS and my tumor type often does reappear. There's always the voice of: Did I make the right decision to not have chemo or radiation? Will I regret it later? Having a brain tumor is never easy, but even more uneasy is having brain cancer and not knowing if your decisions on how to treat your cancer will harm you with other cancers or keep you alive only to die from another cancer. That's a very harsh way to look at it, but unfortunately that is how I see it most of the time, especially since my second cancer diagnosis.

My advice to another brain tumor patient with LFS would be to get multiple opinions on everything from the pathology of the brain cancer to all treatments out there to what other treatments are out there. Don't just do what a doctor tells you is right, if you don't feel right about it. Be comfortable with what treatment you are or are not doing. Seek the advice of people that have been in your shoes before. Have a strong support system, whether that is your family, friends or people online. They will matter most, both when it comes to brain tumors and when it comes to LFS.

Cara's picks for Information and Support: