An Elephant of a Journey 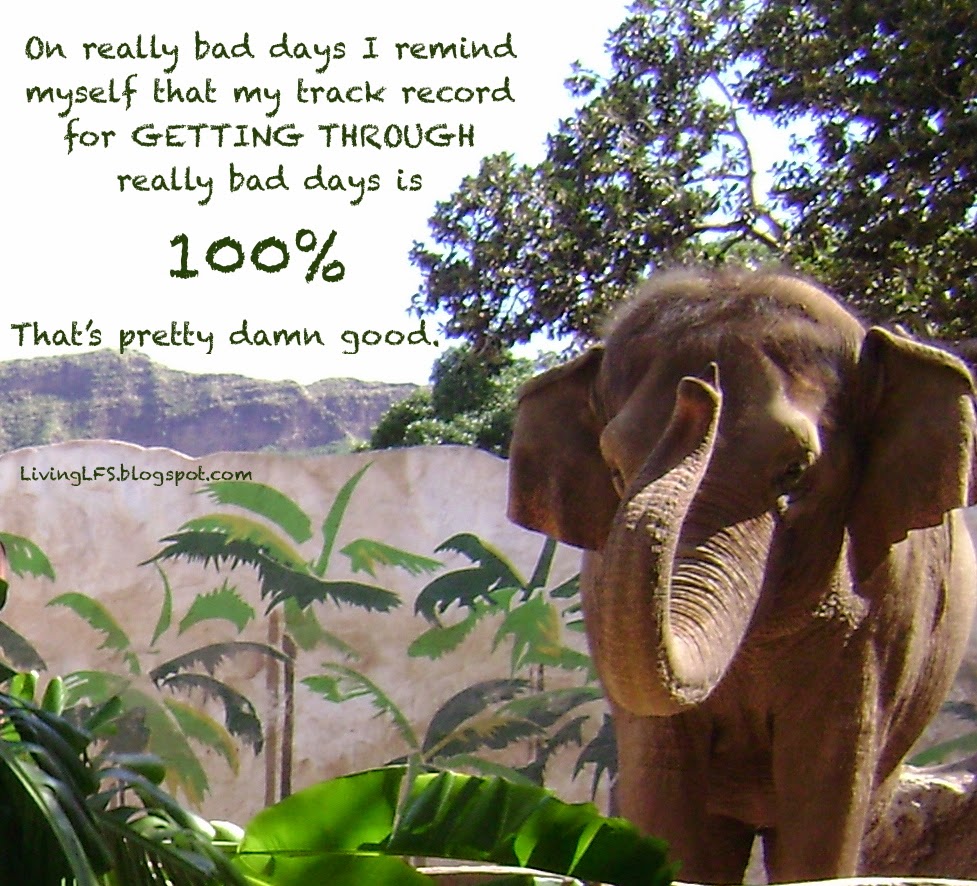 Elephants are known for their great size, their tough skin and their impressive memory. They are social creatures where multiple family units come together to socialize and help each other survive. They have an impressive self awareness and empathy for others. It is almost as if they are Living LFS.
Recently it was discovered that elephants don't get cancer at a rate that's expected of creatures their size. It's called Peto's Paradox. Whales and elephants are expected to get more cancers since they have more cells, but they don't. This led researchers to ask why? Dr. Joshua Schiffman hypothesized a possible explanation at the 2013 LFS Conference- elephants have 20 copies of the TP53 gene. So if one gets mutated- there are 19 other copies to step up and help out with the damage.
So while we mutants do not have those extra copies of p53, we do have the tough skin, impressive memories(before chemo anyhow) in the memories we make living life to the fullest. We have amazing self awareness that saves lives and an incomparable empathy for others. Living with LFS is difficult, but not impossible. Just as a bad day can change our perspective, so does living with LFS.
From zoos, to Babar, to White Elephant parties and Elephant Bars- elephants fascinate people and command respect not only due to their size but due to their beauty and strength. Various cultures hold the elephant dear. Buddha is thought to have been a white elephant in a previous life.  Elephants are part of many stories.
A good example is the fable Blind Men and the Elephant. The story is best summed up in verse by John Godfrey Saxe.
The Blind Men and the Elephant
John Godfrey Saxe (1816-1887)
It was six men of Indostan
To learning much inclined,
Who went to see the Elephant
(Though all of them were blind),
That each by observation
Might satisfy his mind.
The First approached the Elephant,
And happening to fall
Against his broad and sturdy side,
At once began to bawl:
"God bless me! but the Elephant
Is very like a WALL!"
The Second, feeling of the tusk,
Cried, "Ho, what have we here,
So very round and smooth and sharp?
To me 'tis mighty clear
This wonder of an Elephant
Is very like a SPEAR!"
The Third approached the animal,
And happening to take
The squirming trunk within his hands,
Thus boldly up and spake:
"I see," quoth he, "the Elephant
Is very like a SNAKE!"
The Fourth reached out an eager hand,
And felt about the knee
"What most this wondrous beast is like
Is mighty plain," quoth he:
"'Tis clear enough the Elephant
Is very like a TREE!"
The Fifth, who chanced to touch the ear,
Said: "E'en the blindest man
Can tell what this resembles most;
Deny the fact who can,
This marvel of an Elephant
Is very like a FAN!"
The Sixth no sooner had begun
About the beast to grope,
Than seizing on the swinging tail
That fell within his scope,
"I see," quoth he, "the Elephant
Is very like a ROPE!"
And so these men of Indostan
Disputed loud and long,
Each in his own opinion
Exceeding stiff and strong,
Though each was partly in the right,
And all were in the wrong!
Each person could feel a part of the elephant, but none could step back and see the animal as a whole.  It is all about perspective. At times Living with LFS feels like this- we are blinded by the trials of each cancer or possible cancers, we sometimes have to remind ourselves to step back and see the bigger picture. At times we have to treat the cancer as it is and other times we have to step back and treat the whole system. Sometimes we feel disconnected from others and their experiences with the elephant. But somewhere in the community of fellow LFSers- through communication we find solace and hope for survival. We see the elephant and not just the tusk.
Making decisions about cancer and treatment can feel like-"each partly in the right but all were in the wrong".  We each view the elephantine journey with cancer in our own way and each battle, each experience is very personal and different from others. When we come together as a unit, we soon find the similarities and create the mighty creature that is the Elephant- a great metaphor for  Living LFS and for hereditary cancer as a whole. Those who suffer from p53 mutations get cancers in so many various locations and while each cancer is unique and we each have our own genetic fingerprint, we are connected by the mutation. It could be this mighty mutation that holds the ivory key to many of the great cancer mysteries. The elephant symbolizes hope for a world where LFS is treatable or preventable.  Sometime we just have to change our perspective to see it.