March is Colorectal Cancer Awareness Month.  Although colon and rectal cancers(CRC) are not classified as core LFS cancers(Brain, Breast, Sarcoma and Adrenal), we are seeing more and more of these malignancies in those with TP53 mutations. 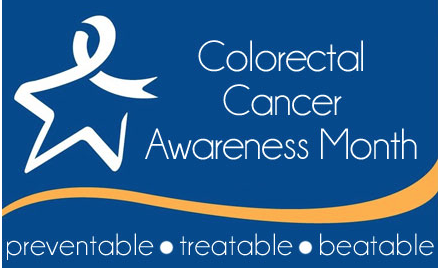 In 2006, Researchers from the Department of Internal Medicine at Brigham and Women's Hospital in  Boston, Massachusetts published an article in Gastroenterology with their conclusions that, "LFS patients with germline p53 mutations may have an increased susceptibility to colorectal cancer and present up to several decades earlier than the general population. LFS should be considered when a young patient presents with colorectal cancer."

The abstract of this article can be found HERE.
In this study, the researchers looked at the data from 397 LFS patients. They found that 11 of these patients had colon cancer under the age of 50. When they looked at the age of diagnosis, they found patients as young as 9, 11 and 15. The median age of diagnosis was 33- which means half of those were diagnosed under the age of 33 and half were diagnosed after the age of 33.
In a community as rare as ours, 11 documented cases is a pretty significant flag, especially with numerous cases occurring before the age of 21. This information can then be used to develop screening recommendations.
Colorectal Screening Recommendations for LFS:
According to GeneReviews, The NCBI/NIH follows the NCCN recommendation that LFS adults be screened for Colon cancer with Colonoscopy every 2-3 years beginning at age 25.
MDAnderson's LEAD Screening follows the NCCN recommendation as well as urging patients to be seen by a specialist in their Gastrointestinal(GI) Center.
Researchers at Dana Farber  found not only an increase in risk of colon cancers, but other gastric cancers as well. As a result, they recommend considering periodic screening with endoscopy(EGD-esophagogastroduodenoscopy). They "concluded that given the colonoscopy recommendations for surveillance of colorectal cancer, the addition of periodic screening with EGD in germline TP53 carriers may be reasonable to consider, particularly in LFS families in which at least one member has gastric cancer. The early age at diagnosis in comparison to the general population suggests that surveillance may need to begin in young adults." http://www.ncbi.nlm.nih.gov/pmc/articles/PMC3595598/
Memorial Sloan Kettering Cancer Center recommends-" a colonoscopy should be done to screen for colon cancer starting at the age of 30 to 40. The optimal age to start and frequency of colonoscopies should be discussed with the gastroenterologist." www.mskcc.org
A recent article on the Cancer Network, Home of the journal Oncology reported that TP53 mutations in Early-Onset CRC (ColoRectal Cancer)were Not Linked to Li-Fraumeni Syndrome. Essentially when researchers looked at a large group of young patients with colorectal cancer, very few had germline TP53 mutations(1.3%) and those who did have LFS, did not meet the traditional criteria for diagnosing or genetic testing for LFS.

This title could be confusing and misleading to many. Although colorectal cancer is seen in LFS, it is not considered one of the "core" LFS cancers.  If you have LFS- there is an increased risk of many different cancers, including colorectal cancer- compared to the risk of someone without the TP53 mutation. That is why colonoscopy is recommended for screening. As of now, there is no way to determine with certainty which cancers a person with LFS is at highest risk for, so screening is devised that targets the cancers that are seen the most often. A person with LFS can potentially get cancer anywhere and those living with LFS will tell you we see lots of rare cancers. Guidelines are just that- not absolutes. It is important for a person with LFS to discuss their family medical history with qualified professionals, such as Genetic Counselors who are trained in evaluating the patient's risk and then advise an appropriate screening plan.

Colorectal Cancer can be difficult to talk about. Screening for colorectal cancer by colonoscopy is not the most pleasant experience but it is one of the ways we can Live with LFS by paying close attention to our digestive health.